This model was kind of an “ebay rescue mission” of sorts… An already glued and primed, with no moldlines removed whatsoever, that was part of a lot I got around six years ago…

Since I was going Nurgle and was quite happy with how greenstuff wasn’t the nightmare to work with on the Hellbrute that I was kind of expecting; (previous experience consisting on a tattered cape) I decided to commit to a Nurgle army at that point… And  with a stripe of the blue and yellow gum that I got some fifteen years ago. (mark of Nurgle confirmed) 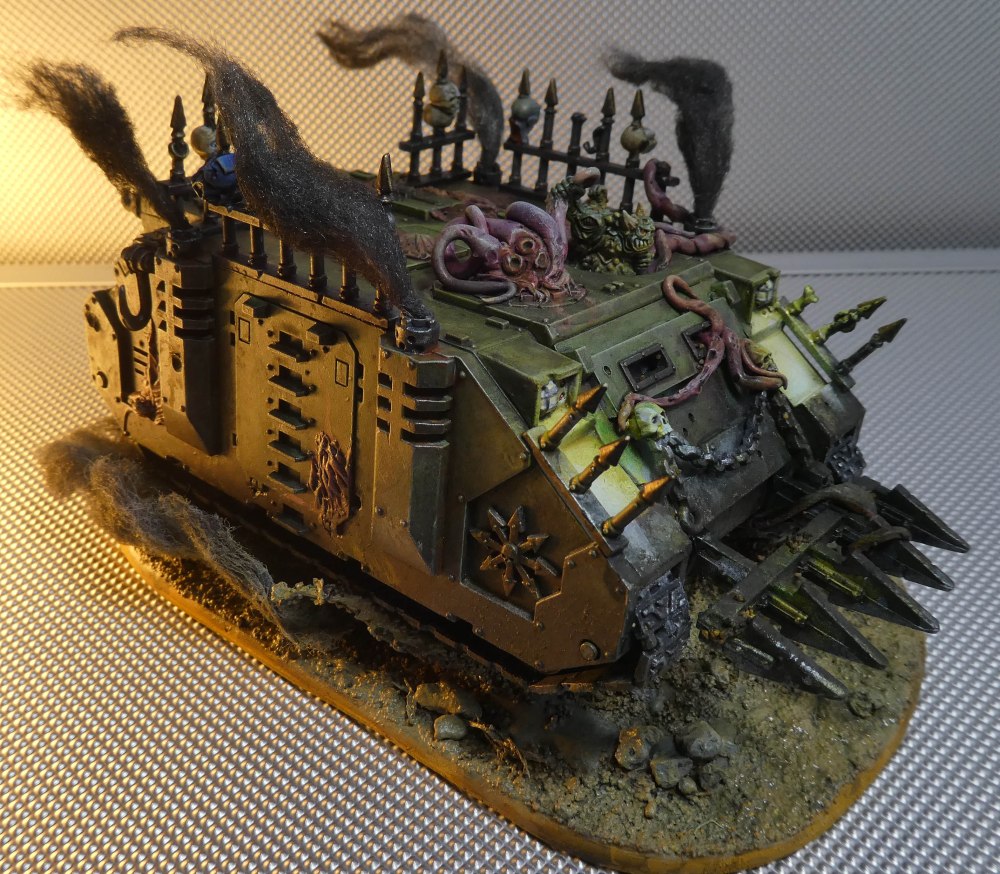 Because… Now that the “imaginary skirmish game in the 40k universe” that I have been toying with in my mind for the past thirty years of collecting, painting, and forgetting all about it for some eons, it’s a reality called Kill Team; then I go all hipster and decide that what I want It’s an army of thousands of points that I will have noone to be pitted against! Genius!

I had no attachment to the tank whatsoever… It kind of had too much ornamentation on it to be a really fluffy Death Guard Rhino, but my attempts at removing some of it made me arrive to the conclusion that this was going to be an additive modification. (the guy who put this together must have spent a bottle of Tamiya plastic-cement on this thing, because those parts are solded like no superglue any biologus putrifier ever concocted!

The guts/tentacles were rolled by hand and given some detail with sculpting tools, and the areas of chaotic infection were a slap of greenstuff that I bended and folded, poked and stretched to a more or less satisfactory state between “letting Nyarlathotep guide my noobish hand” and pure amorphous blob… with no retouching or looking back… pure warp channeling at its finest.

The pustulent outgrowths are made out of silica gel from a dehumidifying bag… Helps keeping the display-case dry and it’s quite toxic. Totally fitting. Hopefully kept under a good primer, copious amounts of paint and some varnish, compared to the transpirable paper bag they ship this stuff even on foodstuffs, this days… will be enough to keep the Nurgle-rot blessings at bay.

I could have turned on the old Dremel drill… Good-Old-Combi-Melta… but I was anxious to make something and didn’t want to continue on a destructive path. The gunner and the missile pod were history, already… but that just makes it cheaper to field, right? (I have no idea of how to play the actual game, really)

I liked the narrative idea that I had tried on the Hellbrute; “Infection and a demonic slug mixed with a machine… given commands by nurglings crawling in and out of it”. (mostly in, because I don’t have that many of those! 😛 ) 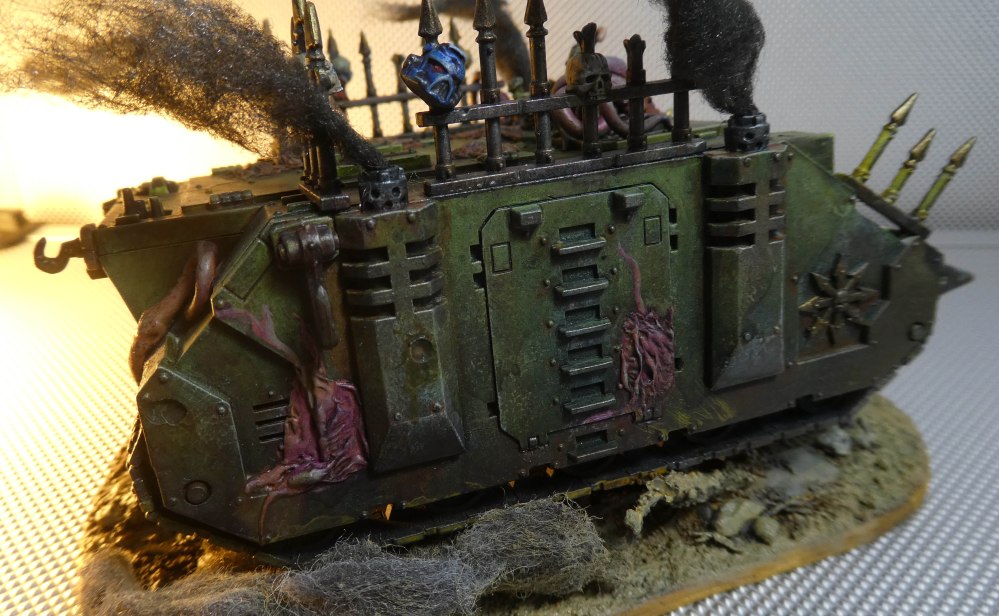 The effect gets rounded by some freehand-painted areas of corruption, blended metal and outreaching dendritic veins… and foulness. That is totally spoiled by most of the lateral-lit pictures I show here.

The nurglings were made to be reining the tank by pulling on the demon-host-crew sensory tentacles… Not that it feels pain, but the immediate response makes the engine roar and the starboard tracks jump in the air. Sorta kinda…

This guys are 30+ years old nurglings, from the old big-square-based monster units, all full of Nurgle-pleasing Lead and diseased detail… To a point, like nothing produced today. I mean… there are worms in the worms that this guys have- kind of detail! By comparison, the new plastic nurglings I was about to paint, seemed like comparing one of those new multi-part marines to my first Space Crusade dudes… but! The new ones have such jovial and dynamic faces that it almost makes up for it… almost, because new ones are all the same size, which sucks the big one.

I had like eight of those, and grabbed two for this conversion. I took out the silly club/bone thingy and fixed them to the watch using blue-tack to lift them up to the opening.

The basing it’s just a wooden board of the appropriate width that I had lying around, very sloppily sawn to shape. The tank itself it’s not glued to the base itself, it only rests over the silicon parts, to a 60º range of security. Disgustingly resilient rerolls will have to do the rest… (Which I think this one doesn’t have, so we’ll see…)

I used hot-glue to make a beautiful mess in which I stamped the tank… sort of gluing it to place, one might say. To then remove it from the semi-flexible material carefully and proceed to decorate with grabble, steel-wool and a very unsatisfactory first test of some crackle medium I got my hands on… which just proves my first instinct with the thing didn’t work, because I didn’t research how to use it at all.

On the painting side… I started with a zenithal spray of white that really gave it that nice vertical transition that I kept by maintaining my pigmentation level on the lows… Or as the kids call it now; thinning down my paints. Seriously… I knew nothing!

Also, because why the hell not… I tried an OSL on the front-lights. I don’t have an airbrush, and a meticulously planned raytracing simulation, rendered with half a dozen blends (or three, or whatever…) was kind of not what I was aiming for, I used a stamp of the desired cone of effect on a paper, and then used white spray to print the “light” base, that then I glaced in yellow and drybrushed back with some pale white. But then, I tried to add a green tint with some further glaces, and totally screwed it.

Here it was before I took it one step too far into total crap.

I did what I could by painstakingly layer half a dozen blends (or three, or whatever) over the guideline of the pretty neatly “raytraced beams” that I messed, and covering with Typhus Corrosion where I couldn’t.

Some puffs of smoke made of black-sprayed steel-wool to the pipes, because Nurgle doesn’t follow no Kioto guidelines.

Sorry that I don’t show any of the greenstuff state or anything, but I had zero faith on what I was doing at the time!